Wraith of the Titans Review: 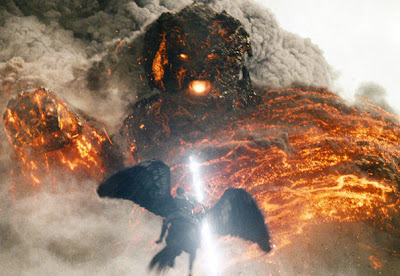 Two years after the anticlimactic and underwhelming Clash of the Titans reached blockbuster success we have the inevitable sequel Wraith of the Titans, with a new director and promises that this film would correct the numerous issues present in the first film. Whilst it is clear that an effort was made to do so, Wrath of the Titans still fails to achieve greatness and instead descends into mediocrity alongside the first instalment.

The action in Wrath of the Titans is acceptably fast and frenetic and at times even manages to be spectacular. It however also suffers from a severe overuse of quick cuts which often left what was occurring on screen confusing and disorienting. There however are a handful of lengthy action shoots that manage to linger long enough to draw undue attention themselves but aren't so short as to disorientate and it is in these moments that the action shines and can be spectacular. Such moments however are few and far between and fail to elevate the action beyond what is expected from such a film which leaves Wraith largely relying on its story which despite some promise is ultimately unsatisfying and barely present.

At its core Wrath of the Titans is obviously a father and son story with this being paralleled in several relationships. However the reason for this focus is not present and what could have made for an interesting framework as fathers, sons and brother where caught in an epic batlle is instead barely present as the film moves at such a quick pace which doesn't allow for what is occurring on screen to resonate beyond a superficial wow level. This is further accentuated by mediocre acting (save a few campy yet undebiably fun performances from veterans such as Liam Neeson, Bill Nighy and Ralph Fiennes) and comedy that breaks up the mediocrity of the story despite more often then not falling flat as a result of bieng overly preditable and ultimatly just another flavor of dull.  I can't help but find this to be unfortunate as had more time been spent developing the already existing framework and had the epic struglle between fathers, sons and brothers been more developed we could have had an interesting film that didn't rely solely on its visuals to entertain. Hence just as was the case with the series first entry Wrath of the Titans biggest flaw could be seen to be its inability to create a plight or characters you cared for. Wrath of the Titans also shares another massive weakness that was present in Clash of the Titans and ends on an anticlimactic note with the final battle ending just as it felt like the action was getting interesting.

In spite of all the issues present Wraith of the Titans isn't horrible by any means, rather it is nothing more then a passable action film that is unable to prove itself a notable improvement on the series similarly underwhelming yet still competent first entry.  Hence Wrath of the Titans does not come recommended.

Remembrance of Things Past
AndrewBallina